Iranian-Australian Islamic cleric and peacemaker, Mohammad Tawhidi, popularly regarded as the ‘Imam of Peace’ ridicules Pres. Buhari over the press release he made on the Coronavirus pandemic, on Sunday March 22nd.

According to Tawhidi, Buhari is scared of terrorists and incompetent to fight against terrorism in the country. He further stated that Buhari and the Prime Minister of Pakistan, Imran Khan, who thinks Japan and Germany share a border, are somewhat alike. 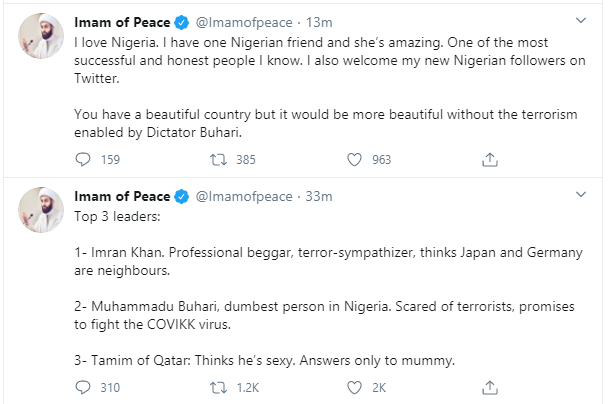 Tawhidi also shared an experience he had with the President. He stated that President Buhari was more of a conflict maker than a peacemaker some perceive him as.

Nigerians should know that I’ve actually had contact with his office before, during civil conflicts (Shia-Sunni/army clashes). I was about to come to Nigeria for negotiations and help achieve peace between sects. But it looks like Buhari loves conflict so he can stay in power. https://t.co/uXstnM8X3I

He didn’t stop at these, he continued further by replying twitter users who countered his opinion about Buhari.

However,  the personal assistant to Muhammadu Buhari on New Media, Bashir Ahmad has replied the Imam, labeling him a coward. He is of the opinion that the Imam is a less courageous and unable to defend himself, reason he chose to block him.

View all posts by Oladele Oluwatobiloba →

Is Wizkid’s sound on a decline or evolving?

“Coronavirus is not a scam” – Federal Government warns (OPINION)