After a fun-filled weekend in Vegas celebrating her birthday with loved ones and yes Offset, Cardi slipped up and let fans catch a glimpse of a little something extra.

In a now-deleted post, the American rapper was seen in bed topless and seemingly unaware that fans had
seen it.

“Lord, why the f**k did you have to make me so f**king stupid and r****ded? Why? You know what I’m not going to beat myself over this.” Adding, “I’m just going to eat my breakfast and then I’m going to go to a party because I’m not even going to think about it.”

In addition, she addressed the incident with a clear message on her story saying, “I did not posted no story about me suing nobody…nobody to be sued for. It was my fuck up…shit happens.” 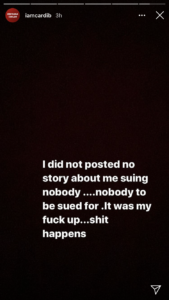 ENDSARS: ‘We Will Not Give Up The Fight For A New Nigeria’ – Don Jazzy